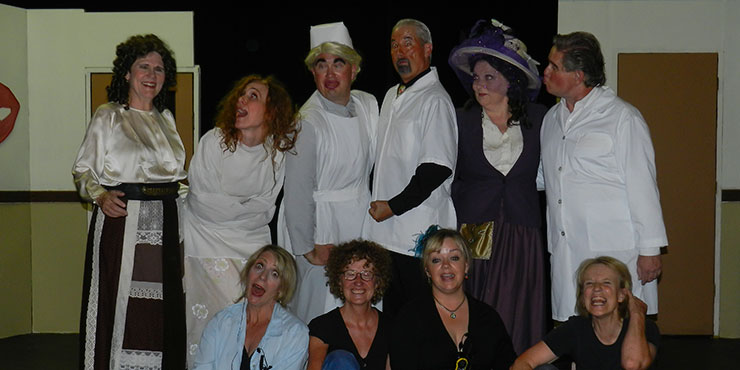 Written on 12 March 2014. Posted in Uncategorised.

Follow on Facebook
Ouray County Players originated in 1991, under the name of Ouray County Summer Theater, with a production of the musical, “You’re a Good Man, Charlie Brown”. Following on the success of this production, came the popular musical, “Annie.” Thereafter, since its inception, OCP has presented both popular works and cutting edge experimental theater to the residents of and visitors to Ouray County. Our past productions include, “Oliver!”, “The Sound of Music”, “All in the Timing”, “The Enchanted”, “Abducting Diana”, and “Sylvia”. In addition, OCP has presented staged readings of “Rosencrantz and Guildenstern are Dead” and T.S. Eliot’s “Murder in the Cathedral.” Also included in our diverse repertoire are live “radio” productions of “A Christmas Carol”, “It’s a Wonderful Life”, “Miracle on 34th Street”, “Sherlock Holmes and The Hound of the Baskervilles” and “War of the Worlds.”

In 2002, OCP became a tax-exempt, IRC, § 501(c)(3) organization. Our stated mission is to promote, produce and present for the enjoyment of the citizens of and visitors to Ouray County, Colorado, all aspects of the performing arts, with a special emphasis on the dramatic arts. Implicit in this mission is to provide opportunities for all members of our community, novice to professional, to participate in all aspects of the production of theatrical events. Further, in addition to presenting our own productions, OCP has sponsored presentations by other theater organizations, from outside the area, including a professional troupe of actors performing some of Shakespeare’s most popular plays in the parks in Ouray and Ridgway.

OCP has plans to sponsor and conduct performance workshops, again to encourage community participation and to develop performance skills. Members of the OCP board of directors, community members and guest artists will lead such clinics and workshops.